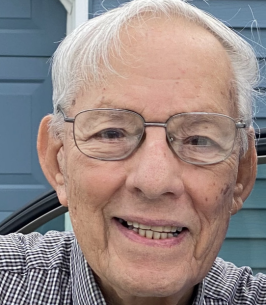 Born in Milford, NH, Vince lived in the City of Bordentown from the age of 4 until his passing.

He was a graduate of William MacFarland High School and receive a BS in Business Administration from Rider College in 1951. Vince was also a United States Army Veteran, being honorably discharged in 1946.

Vince worked for Mitnick Brothers Cigar Distributers as Office Manager for 12 years. Later he was employed by the State of New Jersey in the Division of Criminal Justice in the Administration and accounting departments until his retirement in 1991.

Vince found joy assisting others, in his faith and his church. He was a very important part of St. Mary’s Church of Bordentown. After his retirement and until his passing, Vince became the Sacristan in 1991 and served as a Lector, Eucharistic Minister and resident comedian. He organized the Parish Picnic each year, volunteered in the Community Food Pantry, the Bishop’s Annual Appeal. He also volunteered at Morris Hall in Lawrenceville giving communion to the patients and also conducting the Rosary once a week for many years.

Vince was a Life Member of the Bordentown Knights of Columbus Council 570, receiving his 1st Degree on 4/1/1956 and his 3rd Degree on 6/1/1956. On 11/11/2018 he received his 4th Degree and became a Sir Knight with Bishop AHR Assembly. As a knight, Vince received the Burlington County Right to Life Certificate of Recognition and Outstanding Support and the prestigious Diocese of Trenton Nostrum Ecclesian Tempus Award for extraordinary service and dedication to the Catholic Church.

He was a member of the Secular Franciscan Order for many years, served as treasurer for the St. Mary’s Seniors and was a Life Member of the American Legion Bordentown Post 26.

The son of the late Vincent J. Sr. and Carmela Aveni, he is predeceased by his sisters Mary Aveni and Anne Pihlik, his brother John Aveni who died while serving in the military during WWII. he is survived by many nieces, nephews and friends.

Donations may be made in Vincent’s name to Mary Mother of the church Parish, 45 Crosswicks St. Bordentown NJ 08505.

Due to the Covid 19 restrictions, 100 people at a time will be allowed in the funeral home. Masks must be worn, and social distancing must be practiced when possible. A speaker is outside for those wishing to listen outside during the service.

A Mass of the Resurrection will be celebrated on Thursday February 11, 2021 12:30 pm at Mary Mother of the church parish 45 Crosswicks St. Bordentown. Calling hours will be held Wednesday from 6:00 ~ 8:00 pm and Thursday morning 11:00 ~ 12:00 pm at the Funeral Home. Burial will follow at St. Mary’s Cemetery Bordentown.

Arrangements are under the direct care and supervision of Robert L. Pecht, Bordentown Home for Funerals 40 Crosswicks St. Bordentown, NJ 08505. Please go to Vincent’s Book of memories page at www.Bordentownhomeforfunerals.com to upload a picture, order flowers or offer condolences to the family.