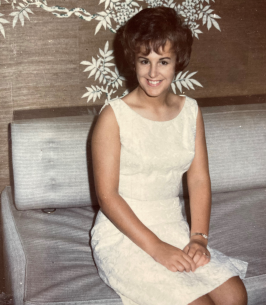 Patricia Cain Wheeler was born on February 7, 1940 in Liverpool, England to Florence (Weisske) Cain and Charles Cain. The third of four children, she and her family endured hardships, including the Blitz during World War Two. In the early fifties, she won a scholarship to Calderstones High School. Her education continued at Royal Liverpool Babies Hospital, where she studied pediatric nursing.

Pat emigrated from England to the U.S. in 1962. As an in-home nurse and au pair, she cared for children and elderly people in and around Long Island, New York until she accepted a job working the telephones for an insurance agency, where her English accent charmed the customers.

In 1965, Pat married William Wheeler, with whom she raised three children in Nanuet, New York; Baldwin, New York; Demarest, New Jersey; and Doylestown, Pennsylvania. She loved babies and often said that her life’s dream was to bring her own children up with more opportunities, and a greater sense of hope, than she experienced in her own childhood.

She worked as a homemaker for many years. As her youngest reached high school, Pat took employment as a teaching aide at The Preschool at Doylestown United Methodist Church, where she was much beloved for her kindness and humor. She retired in 2005 and relished the additional time with her many friends and her six grandchildren. For the last nine years of her life, Pat resided with her son in North Wales, Pennsylvania. She died of lymphoma at her middle daughter’s home in Bordentown, New Jersey.

Pat enjoyed being surrounded by family, as she was in her last days. She was also a fan of birds, opera, old jazz and country music, baked treats, brunches and luncheons, reading, shopping, Star Trek, and women triumphing over the patriarchy.

Memorial services will be held privately. In lieu of flowers, memorial donations may be sent to The Leukemia and Lymphoma Society and to St. Jude Children’s Research Hospital.

Pat is survived by her siblings Anthony Cain, Barbara Price, and Peter Cain; by her children Lesley Wheeler, Claire Kerr, and William Wheeler; and by her grandchildren Justin, Madeleine, Tyler, Cameron, Aidan, and Paige. They and many others miss her very much.