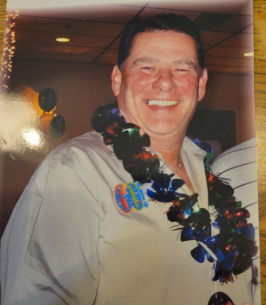 Danny F. Blanchard, 72, died unexpectedly at Brandon Hospital in Florida, on March 27, 2022, the son of the late Irving and Diana (Heitman) Blanchard.

Danny was born in Redbank, NJ and graduated from Freehold Regional High School and Mercer County Community College. He started “Aqua Jet”, the first hot water power washing company. He retired from ICI as the Warehouse Manager and Teamster Driver. Danny met his soul mate Diane (Revel) Blanchard and they married in 2004. He was an active member of the Bordentown Elks and held the office of “Sergeant at Arms” on the Motorcycle Committee. Dan was also a member of the VFW and the Moose. For the past three years, Danny split his time between New Jersey and Florida. Many knew Danny for his work ethic and business, Aqua Jet, hence his nickname Aqua Dan. Others knew Danny as “Dapper Dan” for his meticulous way of dressing. He enjoyed and loved his trike motorcycle the Kil R Bee. Dan was the life of any party and could light up any room he entered. He was also quite the family man and was always there to help solve problems. In addition to his parents, he is predeceased by his brothers Donald and David. Surviving in addition to his wife, Diane, is his beloved furbaby, Lacey; his son,Ryan and his partner, Amanda; his daughter, Megan and her fiancé Steve; his brother Douglas and his partner Beth Palmieri; his sister-in-law Luanne Blanchard and her partner Michael David; his Uncle Smith (Smitty) Blanchard; and close cousin Debra and Michael Telliar; six grandchildren Chase, DJ and Dakota, Peyton, Violet and Emily and many extended family members and friends.

Arrangements are under the direct care and supervision of Robert L. Pecht, Bordentown Home for Funerals 40 Crosswicks St. Bordentown, NJ 08505. Please go to Danny’s Book of memories page at www.Bordentownhomeforfunerals.com to upload a picture, light a candle, make a donation, or offer condolences to the family.